The expectations of listening to John Jarvis present at the morning Advertising Federation program, was set pretty high for myself. I had heard the name many times in the Minneapolis advertising community and wasn’t quite sure where he was going to go with the Ad Fed Breakfast title of “Mad Men to Math Men”.

On Thursday AM, John opened his very candid presentation question-style having a poser as his “alter ego” asking him questions about his life and career. The poser was fellow Creative Amy Van Ert (yes a woman’s voice) from the The Lacek Group, which it was an entertaining touch. 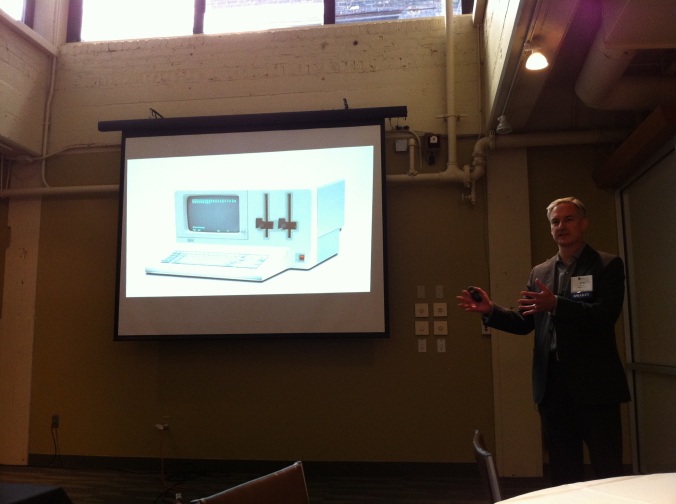 John began his presentation answering the questions of “Why Advertising?”, while commending his experience being on the MN Daily newspaper team where he got to be creative director and learn a lot at a very young age. John said it was easier to find his first job then his second job, which I think many people in any advertising career can relate to.

John quoted Don Draper and even showcased literally 3-martini’s as a presentation slide because he was part of the era, and even though he may not have been drinking them he was around the talented advertising executives that did.

He went on to talk about how important Account Executives are and that many times his career it would be up to them to sell the works and the decisions that were made by them reflected many campaigns and awards he later on went on to receive.

John winning Minneapolis’ Best in Show award was a great memory he shared earlier in his career and he went on to continue to receive many more including a special one at Martin|Williams for the American Surplus Store (which he joked about trying to go to NYC to get an award that they did free work for). His creative advertising work moved throughout the presentation and I continued to notice the cleaver headlines and perfect key-lining techniques (there wasn’t computers in some cases back then, but production of film and letterpress).

John moved on to campaigns that paved the way in his career such as Kemp’s “It’s the Cows” and Duggan’s with the hypnotizing billboard. 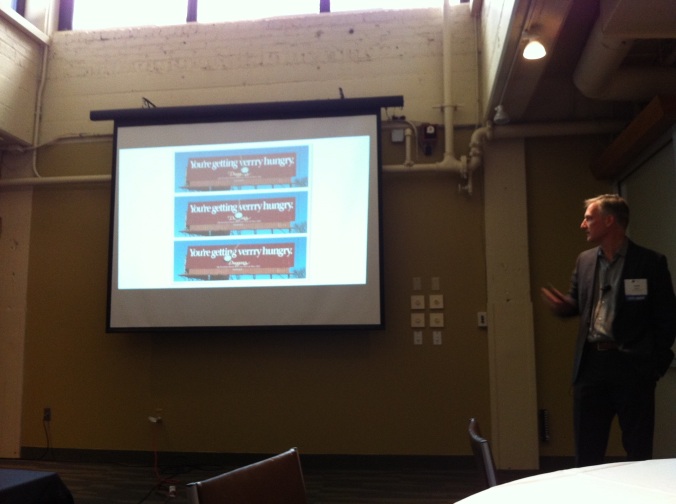 John mentioned many fellow creatives throughout his story such as Ken Lynch and Jeff Jones. I will have to google these guys a bit more to learn their amazing stories too.

Colle+McVoy (John put the + in the logo and took away the &) being the instigator to move the team down to Hennepin Ave from Bloomington and the reason why the creative work started to speak for itself. After being laid-off there and being true to the fact that “business is business”, he continued to show his work including a historical Dunwoody – swearing radio campaign – along with the Ely April Fools spoof that literally put Ely back on the map.

John Jarvis is now at a place where he is the Chief Creative officer and Managing Partner, Ogilvy & Mather speciality Loyalty Marketing agency, The Lacek Group. There he is paving the way with this agency’s very important part of the puzzle, DATA.

It was an honor to have been able to meet John Jarvis and I was pleasantly surprised on The Lacek Group following he had brought when him Thursday morning with over 20 supporters there in attendance. I look forward to the opportunity to learn more about John and to work with him first-hand at the Lacek Group. He truly seems like a stand-out, genuine, hard-working ad guy.

Thanks for stopping by. I'm the Social Type and also have become the Connector of the Connected. Need an handyman? A landscaper? This blog was created nearly a decade ago to spotlight life happenings on the go!
I also believe in giving credit where credit is due, so if at any time you see work that is improperly recognized, please send me quick note and I’ll gladly update the information.
Similarly, all graphic design elements, layouts and photo combinations presented here are designs by this mn design gal and should therefore be credited appropriately if reposted. Let's keep things nice and friendly, it's all about the love of life happenings, tips and tricks, mom behaviors and must-have's, home improvements, social learning and sharing.
-Tricia Jo

Ads at bottom of this blog are brought to you by Wordpress.