History [just skip or scan if not interested in the facts]
Pinterest began development in December of 2009 and was launched as closed beta in March 2010. Nine months later he had 10,000 users and was operated out of a small apartment until 2011. The iPhone app launched March 2011 then was listed by Time magazine as “50 Best Websites of 2011”. In December 2011, the site became one of the 10 largest social networks according to Hitwise data. Then in January 2012, comScore reported the site had 11.7 million unique users mark. 2012 Pinterest has some major changes including someone no longer needed an invite to join the site and Android was launched. The latest is that Pinterest acquired Livestar, which is Livestar is a mobile app that lets you get recommendations quickly and easily from critics, friends and people with the same taste as you. Currently Livestar provides recommendations for restaurants, movies, music and apps, with more categories coming soon…. To Be Continued.

What does a MN Design Gal do with a thing called Pinterest? I am on Pinterest every day for at least 1 minute. It’s something that takes me away from thinking about interactive environments, writing in less than 140 characters and inspires me to try some new fashion combinations, decorate a dresser (that I have still never done), try a new hairstyle, bake a rainbow cake and since I’m a BRIDE-To-BE my boards come in handy to plan with.

Board naming is tricky and luckily I started with a plan having the topic of the overall board Hair_MUSTTRY, notice it has an initial capitalization then there is an underscore and the description of how it relates back to the main topic. 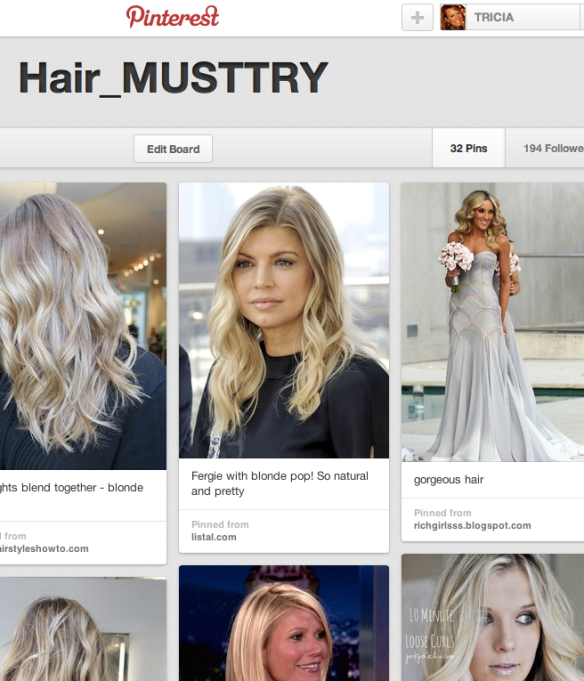 This makes it easy to place items into particular buckets because the last thing you need is an account with only 3 boards filled with hundreds of pins that becomes frustrated to track something down again.

How to stay organized for a wedding?

My boards all start with Wedding_theDRESS, Wedding_MYMAIDS, Wedding_INVITE, Wedding_FLOWERS… This way I’m not scrolling through the endless amount of dreams but it can be quick and easy to organize and be your thought-leader. 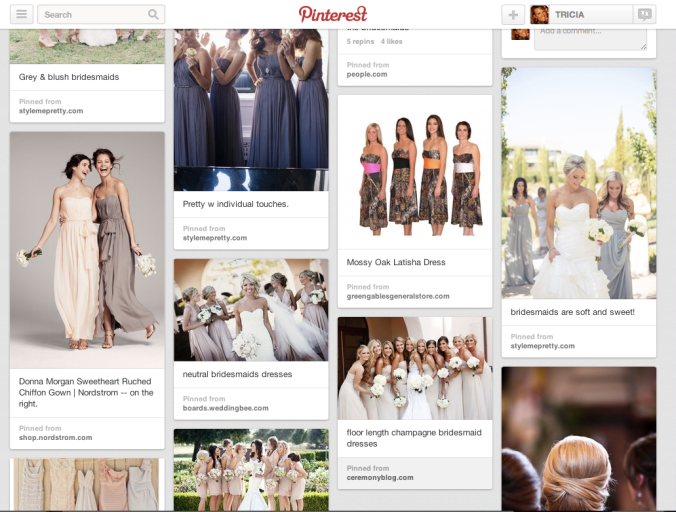 Can you spot the “joke” pin for my friends and true followers to catch?

Have I ever deleted a pin? YES. And someone should. Lets face it your probably buzzed-up 25% of the time your on @Pinterest, because it’s just like flipping through the channels of your TV or looking through an Entertainment magazine.

Do you ever review your HOME feed or do I search only? I ALWAYS start with my homefeed. This is something that surprised me, most of my friends don’t and will go directly to the category they want to know about. Food, Fashion, Baby… One of the best things about Pinterest is you can follow your favorite designers, fashion icons, celebrities or even just fashionable friends and have the most diverse feed that features all things you love!

I don’t enjoy pins about animals, cars or things from garage or flea markets. I actually used to get bothered by the quotes but now have started the best in Words_READ DAILY board to keep me inspired and have printed several for my desk, friends and home art.

Something I have started that has the most follows is my board Haveit_WEARIT_LIKETHIS. This started with having a hard time on deciding on what to wear in the mornings [actually started when I was 5 years old]. Pairing the same things together gets boring very fast. When adding a bright pair of pants with a Junior High jean jacket and a necklace could be the needed inspiration to wear to work that day [I wish someone would have told me this earlier]. Pinterest helps you be brave enough to start wearing floral with stripes. No one at work does it, but I have this old floral scarf and my new strip shirt I’m already sick of, will make a whole NEW statement!

I started #PinnedItLivedit because I was inspired by fashion and do-it-at-home projects. DIY usually comes from something like a Pinterest post so why not show your friends through an easy hashtag or post that you got it from Pinterest. You Pinned it – Lived it! I pinneditlivedit.com

Got a good content that shows a fashion statement, DIY project or something you cooked that you pinned it lived it? Let me know and you can be spotlighted on the website and pinterest. Email Now.

I’m thankful for Pinterest because it will always be something I refer back to for party planning, baby fashion, everyday fashion, gift ideas, decorating and if I ever get married again -Gross! Just kidding!

If this hasn’t yet inspired to start using Pinterest, maybe go and dust off that cork board you have in the basement and start living the life of pinning again.

Thanks for stopping by. I'm the Social Type and also have become the Connector of the Connected. Need an handyman? A landscaper? This blog was created nearly a decade ago to spotlight life happenings on the go!
I also believe in giving credit where credit is due, so if at any time you see work that is improperly recognized, please send me quick note and I’ll gladly update the information.
Similarly, all graphic design elements, layouts and photo combinations presented here are designs by this mn design gal and should therefore be credited appropriately if reposted. Let's keep things nice and friendly, it's all about the love of life happenings, tips and tricks, mom behaviors and must-have's, home improvements, social learning and sharing.
-Tricia Jo

Ads at bottom of this blog are brought to you by Wordpress. 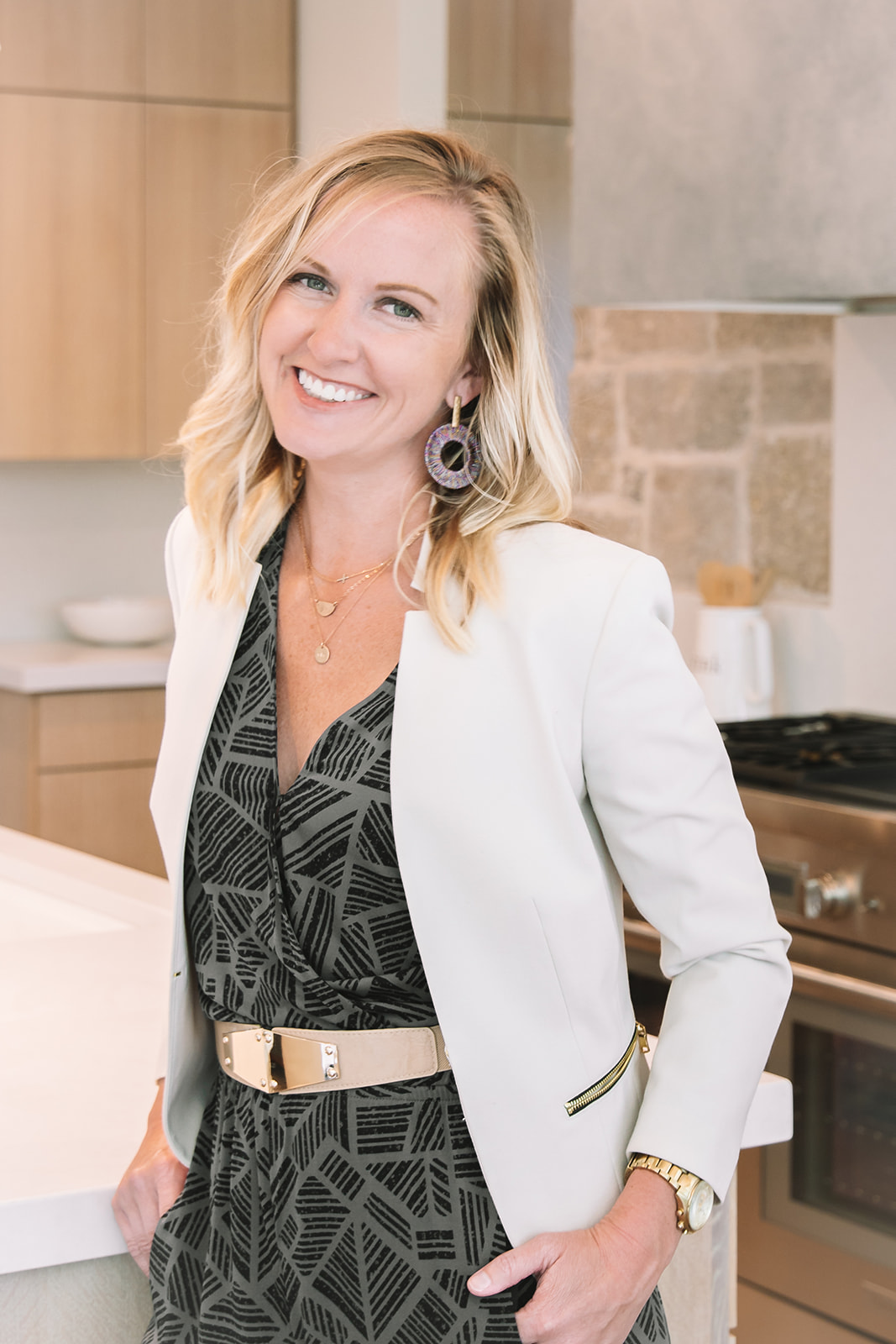